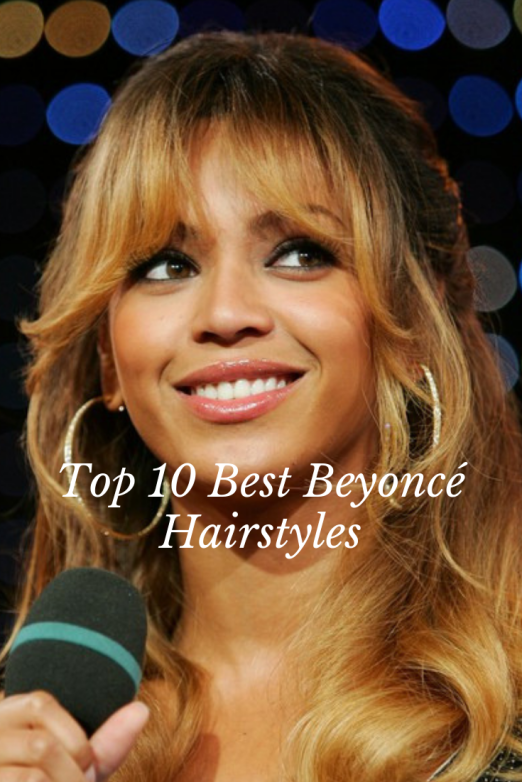 Beyoncé’s hair has gone through incredible transformations in her 20+ year career as an entertainer and performer. I am a big fan of her music but I have always loved her approach to her hair. She loves blonde hair, but she does surprise us every now and then with her wigs and her natural hair is very long as well. Here are her top 10 best hairstyles.

My favourite hairstyle is her hair during the B’Day era of 2006. The wispy layers just made her skin and beauty pop like nothing else. I hope she brings that style back! 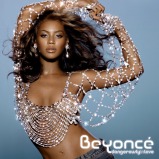 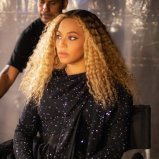 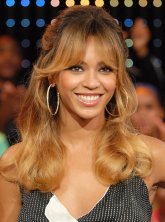 She seems to like sticking to honey blonde. I have seen pictures of her with brown hair and she does look wonderful with brown but she has her signature which is honey blonde hair with dark tones every now and then. Her makeup tends to match the warmth of her hair colour which is something that I find interesting.

Which one is your favourite?

Get our email updates here

{Images: Both screen caps were done by me & the 3rd photo is from the Daily Mail}

Verdict: This is definitely the best hair – B looks good with loose curls. I love this hair weave & I hope to emulate it with darker hair.

What do you think?

Today was a milestone for me because I did my first cold call in a long time. I did not get through to the decision maker but I got a key name which I can use to follow up when Easter ends next week. How has your week gone for all of you, whether you are at work or not? I also have been building a new list of cold prospects, it’s an organic list I am collating myself – it’s extremely time-consuming but I am aiming for millionaire status so I know I have to put in work.

King Beyoncé got herself a tumblr + sent her first tweet. Good for the king! As some of you regular coals know, I love Beyoncé! So it’s cool to have a spot to be a crazy stan and not be judging for it ha ha ha!

How has your week been?

I think it appeals to my Taurean love ideals, but I love it.

Shoes are an addiction for me. The way your toes can look as round as the moon in a pair of heels is not matched by other types of shoes. The following shoes I have picked scream sex appeal and high-heeled luxury for businesswomen or women who want that power business look for their downtime. 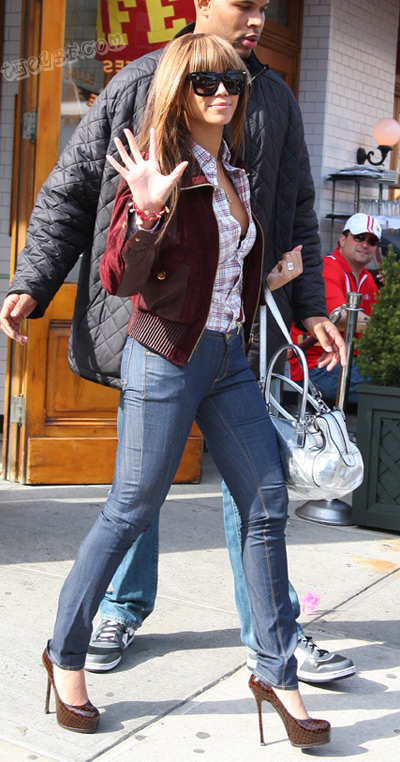 Do you think high heels are appropriate for where you work or are you a ballerina girl?

The Queen got a 41 gun military gun salute in Hyde Park this week to mark 60 years sitting on the gilded UK throne.

I think King Bey would enjoy a military gun salute her damn self! She’s back after giving birth! I love this royal blue ring (sapphire maybe?) that she is wearing.

Would it be appropriate to wear to a business meeting or work or is it too gaudy? I love it!

Beyoncé’s on the cover of the new issue of British Harper’s Bazaar. There is nothing stopping this hot musical juggernaut from Texas! Here are my 7 seven reasons why Beyoncé continues to get people talking:

1. She’s relentless: for the release of this new album, King B has been everywhere from the glossy pages of W magazine to the muddy slosh of Glastonbury. Do you think there is anything such as being too persistent? Maybe Beyoncé can answer that!

2. She’s beautiful: yes people, that goes without saying but her beauty definitely has people watching. Look at the hundreds of comments gossip blogs get by posting her looks. Do you think she gets off on looks alone? Now, I know you don’t think that! Her stage costumes and her general dress sense always has tongues wagging too.

3. She seems to want to do everything: this is the one thing about Beyoncé that I think riles people up. Films, perfume and music? Why the hell not I say! We live in a world of capitalism – if it works for her, it should work for you too!

4. She’s a top class performer: it shocks me that people only discovered Beyoncé’s performing skills during Glastonbury this year. Having seen her in concert twice, I know this girl can run around like no one else.

5. She sells: without a doubt, Beyoncé’s brand of R&B pop is clearly still a delicious morsel with the buying public. BET cites Beyoncé sold over 1m units in the US, making her platinum in the US in just one month. That’s impressive and oh yes, she has already sold 1 million CDs worldwide and yours truly ordered hers as well. Beyoncé sells because she appeals to her fans. And yes sirs and ladies, one of them is me!

Do you think Beyoncé is over-rated and over-saturated or are you ready for her next single, Party? Tell me in those comments! Personally, I think from a marketing viewpoint, Beyoncé is successful because she is wholesome and there in lies her appeal. What do you all think?

{All scans from The Fashion Bomb} 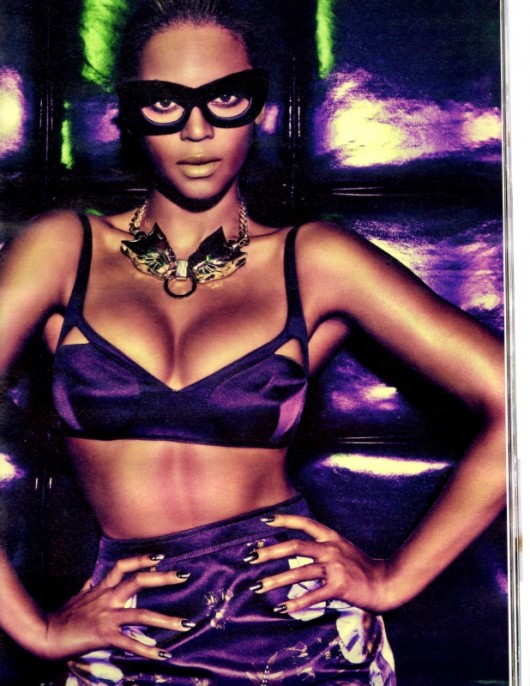 END_OF_DOCUMENT_TOKEN_TO_BE_REPLACED

This post is for my vintage Charcoal Ink readers who know it is Beyoncé season, so what else does that mean on CI? More Bee-themed posts! 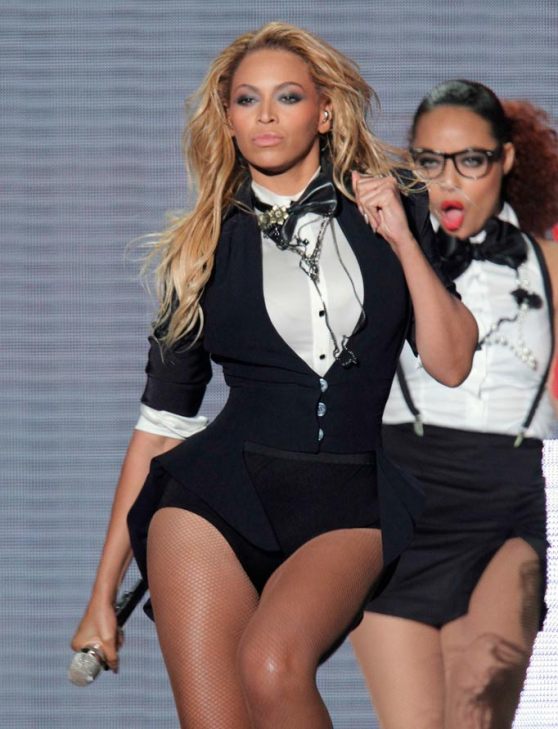 I’ll be honest, I have not been on my B grind as much as I should be. Too focused on my business, but I cannot wait for her new album now that I have some relaxing time off this Friday evening. This picture above was done for one of Oprah’s farewell shows and it reminded me that I really need to whip my arse into shape!

Why her legs are awesome in her tuxedo bodysuit:

As if they need any explanation, the songbird from Houston has some exercise regime that creates legs that look like columns. I have put on weight and my legs are jiggling like gelatin in Haribo sweets. It is not cool. When I watched the performance of RTW that Bee did for Oprah, I noticed that besides her voice, the star of the show are them pins!

Just when I felt like reaching for a bottle of ice-cold Coke from the cooler-fridge today, I thought about how I want to get my legs in shape. Somehow, I think Beyoncé does add that libation to her diet!

Do you think she has one of the best bodies? What do you think of her legs? I love men and I only wish I had legs like hers so keeping the attention of my boyfriend would go easier!

Tom Ford* is the shit. We know this. However, he has just raised the stakes. Beyoncé was one of his models at his hush-hush womenswear collection that was not televised.

The first picture is out. Look at her glow. Her her is a large blonde curly do that looks like quite a few extensions were put in the back. I love this look. Wild and wicked, just like Tom Ford’s collection.

I love seeing her do something different with fashion and style. The hair is crazy, but lovable.

* = Tom Ford’s makeup collection must be in my life. Immediately.

What do you think of the image above? Does she look great in Tom Ford?